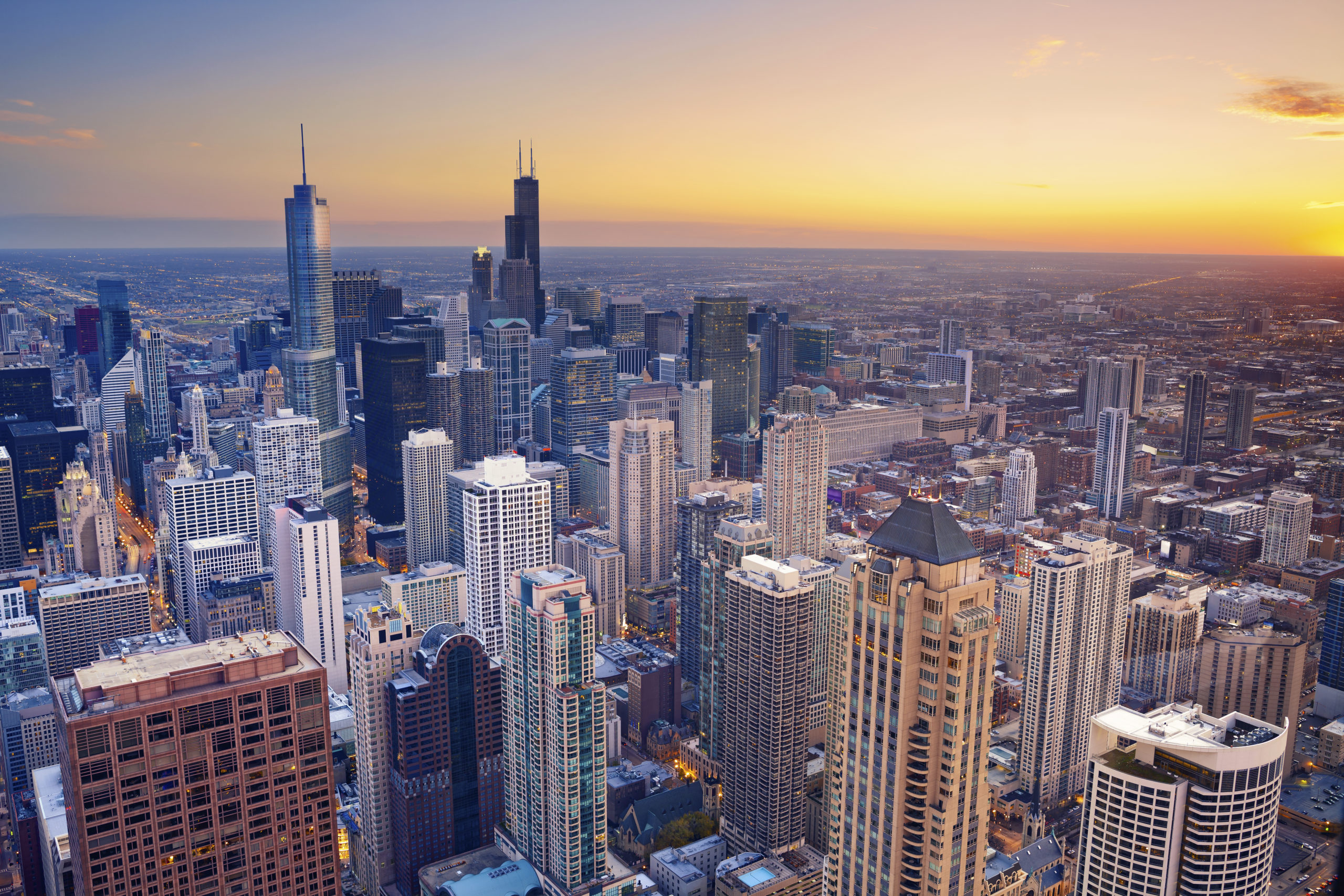 Chicago is known for many things. In addition to delicious deep-dish pizza and Italian beef sandwiches, the Windy City has a reputation for being dangerous. As the third most populous city in the United States, Chicago naturally has a crime rate above the national average. However, it’s important to note that certain regions of the city experience more crime than others.

If you are planning to move to the Midwest’s biggest city – or even just visit – you should know the safest, as well as the most dangerous neighborhoods in Chicago.

In this post, we want to discuss some of the data on crime in Chicago, as well as the best and worst areas. Let’s get into it.

When looking at the big picture, the answer is yes, Chicago is a dangerous city. As one of the biggest cities in the country, the crime rate in Chicago is very high – almost 70 percent higher than the national average, according to Areavibes.

Now, Chicago may be a victim of a bad reputation.

We’ve all heard the city being referred to as the “murder capital”. This reputation was exacerbated in conservative political campaigns during Barack Obama’s presidency – as Illinois is his home state. According to a 2022 study, Chicago actually ranks number 10 on the list of most murders per capita.

When looking past the big picture, the real answer to “how dangerous is Chicago” depends on where you go. The city covers 234 square miles. Most areas are perfectly safe – while others are best to avoid.

What Are the Most Common Crimes Committed in Chicago?

Here are some of the most common crimes committed in the Windy City by category.

Theft is very common in Chicago, with around 560 cases on average per 100K people every year. Be sure to always keep belongings secured and never leave anything unattended outside. Robberies are also a big problem in the city. If you’re carrying cash, try to limit yourself to only what you need – and don’t display it unnecessarily.

Motor vehicle theft is an extremely prevalent crime in the most dangerous neighborhoods in Chicago. Per 100K people, roughly 12 cars are stolen daily. The crime is so common that the city’s police force has a special unit. Even in the safer areas of Chicago, it’s recommended to always lock your doors and avoid leaving valuables in the vehicle.

Assaults occur at 566 cases per 100K people annually. Many of these assaults happen after dark in the dangerous neighborhoods in Chicago. Always be cautious of your surroundings and avoid long walks alone at night.

Rapes are an unfortunately common part of the crime rate in Chicago – with 67 cases per 100K people every year. Never wander around alone at night, especially in more dangerous neighborhoods. Take a cab, Uber, or Lyft if you can.

The murder rate in Chicago is roughly 21 cases per 100K people annually. Murders mostly occur in the most dangerous neighborhoods in Chicago. If you’re passing through, be cautious of your surrounding and be extra careful at night.

The Safest Neighborhoods in Chicago

Before we get into the places to avoid, let’s get on a positive note with the safest neighborhoods in Chicago.

Forest Glen is a laid-back, family-friendly Chicago neighborhood boasting a crime rate 71 percent lower than the rest of Chicago. The area accommodates many retirees and families with young children. That alone should tell you what you need to know about the safety of the area. The neighborhood is also home to outstanding schools and plenty of places for entertainment.

Nestled on the south side of Lake View, Lincoln Park is generally known as an upscale neighborhood in Chicago. The crime rate in this area is around 24 percent lower than the remainder of the city. While Lincoln Park isn’t the safest neighborhood, it’s certainly not overly dangerous. Close to a plethora of tourist attractions, it’s a prime place to live for many residents.

Lake View is one of the most desirable places to live in Chicago, with a crime rate 40 percent lower than the rest of the city.

Overlooking Lake Michigan, the area is great for renters and commuters – with quick access to the city’s renowned public transportation system. Concerning the other safe neighborhoods in Chicago, Lake View is surprisingly affordable for young professionals.

With a crime rate 72 percent lower than the Chicago average, Norwood Park is one of the safest neighborhoods in Chicago. The area is most desirable for families – with great schools and a rich history.

Located in the northwest region of Chicago, Edison Park is the safest neighborhood on this list – with a violent crime rate 77 percent lower than the average. The area is home to many of Chicago’s police officers and is very welcoming to families and young professionals.

One of the best parts about Edison Park is it feels slightly separated from the rest of the city – as it was once its own town. This adds to the safety of the area.

Mount Greenwood is perfect for upper-middle-class people looking to move to Chicago. Thanks to a myriad of amenities and support from police, the neighborhood has a crime rate of 61 percent lower than the rest of the city.

West Lawn is a safe neighborhood perfect for working-class residents. The crime rate sits at 41 percent lower than the rest of Chicago. Additionally, the area is home to many public and private schools, making it perfect for people looking to move to Chicago for an education.

Westmont is known as one of Chicago’s most family-friendly neighborhoods – with the number of children being significantly higher than in other areas. The crime rate in Westmont comes in at 65 percent lower than the city’s average.

The Most Dangerous Neighborhoods in Chicago

Now that we’ve discussed the safest neighborhoods in Chicago, let’s get into the places best to avoid.

Englewood is no stranger to high crime rates – with 9,386 reported out of 25K people. Violet crimes are seven times higher than in the rest of the country. These higher rates are often attributed to high unemployment rates and a low median income.

This is another dangerous area tourists and new residents are wise to avoid. The neighborhood has 7,451 crimes reported for 100K people. Like Englewood, West Englewood is also plagued by high unemployment and low income.

Back of the Yards

Many of these crimes can be attributed to poverty in the Washington Park neighborhood – which comes in at an alarming rate of 48.2 percent.

South Deering is another neighborhood known for its small population and high crime rate. There are roughly 5,000 crimes reported for a population just north of 14K. The homes in South Deering are known for being affordable. But it’s not recommended to move here as the area is extremely dangerous, with most crimes happening on the sidewalks.

The Altgeld Gardens neighborhood is plagued by unemployment – coming in at 23% with a population of around 1,500. Unfortunately, this trend all too often leads to high crime rates, and this area is no exception.

Riverdale is one of the most dangerous Chicago neighborhoods, with an average crime rate of 743 reported for every 100K people. Located on the south side of the city, the area is close to the freeway – which may be a contributing factor to the crime rate. Unfortunately, this area is also plagued by poor economic conditions, with an unemployment rate of 40 percent.

West Garfield is known for property crimes – which are 200% more common than the rest of Chicago. Like most entries on this list, the West Garfield neighborhood has an extremely high poverty rate. While the home prices are low, we advise avoiding this neighborhood if you have a family or live alone.

South Chicago is infamous for its high crime rate. Coupled with a low median income and a high poverty rate, residents in this area are vulnerable to violent crimes – most of which occur to pedestrians right on the sidewalk.

Even though there are safe and unsafe neighborhoods in Chicago, you should always have a plan if an incident occurs. If you’ve been injured in a violent crime, you have rights.

The first thing you need to do is file a police report. Next, begin collecting as much evidence as you can. If you plan to seek compensation for your damages, the most important thing you can do is hire a Chicago personal injury attorney. These lawyers understand the legal landscape of the area and how to navigate cases effectively.

Trying to seek justice on your own will be incredibly difficult, maybe impossible.

Now, many people believe they cannot afford a personal injury attorney after being involved in a violent crime. This is not true. Personal injury attorneys work on a contingency fee agreement. This means they collect a percentage of the total settlement AFTER they win the case – they won’t ask for any upfront costs.

In other words, everyone can afford a personal injury lawyer after an incident.

Chicago is not as dangerous as the news makes it seem. As long as you know where to go – and where NOT to go – you shouldn’t have issues. Do your best to avoid the most dangerous neighborhoods in Chicago listed in this article.

If you have any questions about Chicago neighborhoods – or personal injury law – Midwest Injury Lawyer is happy to assist. Call our office at 312-786-5881, send an email to info@midwestinjurylawyers.com, or request a consultation online.